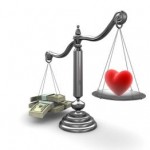 It is not uncommon in an urban setting to rub shoulders with people who make a far less or more income than you. This usually is not an issue if there are no ill intent involved such as con artists. How about dating people whose income largely differs with yours? As much as we’d like to believe that love sees no color (the color green) but it would be difficult to neglect the issues you may encounter.

I once read an article regarding a woman who was an executive with a very nice salary. Her boyfriend was a professor at a local university. She was struggling to cope with his discomfort when she wants to engage in fine dining and participation with her social circle. Although a professor and possessing a PhD was very respectable, it is no secret that academia pays significantly less than private industries to its executives.

A similar dilemma may ensue when searching for dates in online dating. With sites such as Sugardaddie.com, it’s members may already accept the fact that their dates will make significantly less than them. I wouldn’t be surprised if they had hit up with a number of ‘gold-diggers’ who are there for their money. With this in mind, many online dating sites will include a section regarding how much income you make and what income level are you willing to accept as a potential date. Unless a subscriber misleads their level of income, there should be no surprise unless they lost their job during the process. (I actually don’t recall if there was an option to put $0 as income. Maybe I can go back and check my registration screenshots.)

How do you cope with this? If both of you are serious about this relationship, this should be fairly easy to resolve.There are many activities which you can engage in which would not be impacted by money. Enjoying a picnic at the park, watching movies, heading to the beach are some examples. It doesn’t take a millionaire to do some of these things. Try to avoid buying extravagant gifts to make up to your date who makes more than you. Enjoy each other, not your wallets!

If either one of you are bothered by this issue. This relationship probably won’t last.

How to avoid a “food hooker”