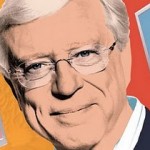 Dr. Neil Clark Warren, founder of eHarmony.com wrote a piece on Huffington Post pleading people seeking to get married to “Have a second thought”. The title of the article was clearly intended to raise eyebrows and stir up controversy. How can the founder of a dating website who prides in the number of marriages based on their compatibility formula be advocating against marriage?

If you read the article in its entirely, this is simply not true. Dr. Warren is actually doing the opposite, he is emphasizing the importance of finding the right person for the right reason based on, you guessed it, compatibility.  Dr. Warren writes about a sad trend that for the first time in U.S. history, statistics released by U.S. Census Bureau show that fewer than half of the households are married. This can be due to several reasons which Dr. Warren does not get into. He does get into why some marriages end up in divorce with choosing the wrong person to marry as his argument.He explains that getting a divorce is such a painful experience from his witnessing hundreds of people go through this.

Dr. Warren has a great point. With the fast lifestyle and media and celebrities portraying marriage as some sort of a removable badge it is no surprise that people don’t take marriage seriously.

There are some things that pay off in life by being patient and take the time. Relationships is one of them.

How to avoid a “food hooker”