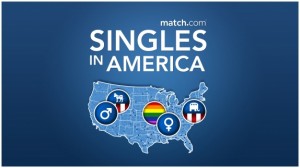 Match.com released its second annual comprehensive study on singles in America. The report goes into researching how single women and men think in today’s time. They surveyed over five thousand singles for this report on an array of topics including sex, relationships, love, and thoughts on dating.

Match.com financed this survey and reached out to Dr. Helen Fisher, Dr. Laura Berman, and Dr. Justin Garcia for their views on the survey results. Keep posted on their blog at http://blog.match.com for upcoming entries resulting from the survey.

Here are some more interesting findings:

Which political party has a better set life?
-Conservative Republicans (40%) reported to be more satisfied with sex in marriage but also reported to having the least number of times having sex a year.

Is fidelity more important in the U.S. president than in a partner?
-Almost 90% of those surveyes said there was no excuse for infidelity by a politician while 62% of men and 80% of women say sexual fidelity in a relationship is a must.

Partner preference between Republican and Democrats:
Liberals prefer to find someone with a sense of humor, independent, and similar lifestyle.
Republicans look for someone who have the same background and interested in marriage.

Men are more comfortable displaying affection in public:
41% of men have no problems kissing in public compared to 31% of women.

Men are as stressed about being lonely as women:
31% of men and 33% of women indicated that they find loneliness very stressful.

Match.com Registration and Walk Through